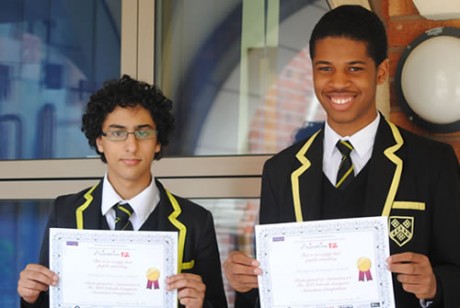 Christian’s War with Mathematics and his joint entry with Yusuf Ahmed, The Inspiration, were 2 of just 35 nominees from a nationwide field of over 900 entries into Animation12.

As well as being highly commended in the key stage 4 individual entry group, War with Mathematics won the first prize of an iPad and a £30 Amazon voucher in the Turing category for animations which celebrated the work of Alan Turing – well known for his codebreaking work at Bletchley Park and for being “the father of computer science” for his early work on the mathematical basis of programming.

Christian’s work on his joint entry with Yusuf Ahmed, The Inspiration, also saw him win another Amazon voucher after it was commended in the key stage 4 group entry category.

Christian has become used to success in the competition – it was his second consecutive year as a prizewinner after he was highly commended for his animation on staying safe online, FaceJournal, last year, and he is already planning his entry for 2013!

The boys’ winning animations – created using professional multimedia authoring software Adobe Flash – were both been in the making since October 2011 and are available to view at the link below.”